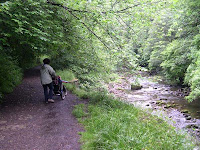 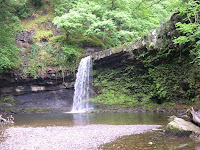 We’ve teamed up with the excellent website “Pushchair Walks” to provide our blog readers with some new walking ideas with their children. Here is a walk written especially for Adventure Togs customers.

Beware – you need good weather for this one if you are going to attempt to reach the waterfall and a good all terrain pushchair! (Could be dangerous otherwise)

Here it is: “Determined to get out between showers at the end of a wet weekend in the Brecons, we wanted to see how far we could take the off-roader up the famous waterfalls valley to test a route for www.pushchairwalks.co.uk. We knew the waterfalls from our pre-pushchairing days and the path on the map looked good. Not only that, but the information board at the car park in Pontneddfechan said pushchairs could get to a riverside picnic area, so we thought we’d give it a go! With Rhodri snuggled up in the pushchair and Rhiannon in the papoose, we set off in the first dry spell of the day. The river valley was beautiful, with the Nedd Fechan cascading down beds formed by the natural dip of the sandstone rocks. Lined with trees, the broad gravel path followed the river along past overhanging cliffs and abandoned mine buildings where it joined the old mine railway – you can see the stone sleepers still in place now forming the path. It’s hard now to imagine that this beautiful valley was once a silica mining area. We soon reached the picnic area, which really is accessible for all pushchairs, including double buggies, and is a lovely place to go for a walk in itself. However, as we had the off-roader we decided to push into the unknown and aim for the waterfall! The path narrowed shortly after the picnic site and our hearts fell when we saw a flight of steps, but there were only 12 and they were pretty easy to be honest, after which the path levelled off again. Crossing small tributary streams, we continued through woodland and up the river bank. We knew we were getting close when we heard the thundering cascade of water and then the path divided at a bridge. Which way should we go??? Well, needless to say, we tried both. It was far easier staying on the same side of the river where the path leads you to a fenced viewpoint overlooking Sgwd Gwladus, where the river cascades over an undercut bed of rock like a horse’s tail. The waterfall is named after a daughter of a 5th century chieftan – one of 25 sisters! After admiring the falls, we attempted to get further up the valley, but the path deteriorated rapidly and we had to admit defeat. So we headed back down the river, catching sight of dippers and flycatchers on the way. As we got back to the mine buildings, we felt the first drops of rain and by the time we got back to the car we knew we’d timed it well as the heavens opened, just in time for a soggy drive back home to North Wales! ” A map and full route details for this walk (along with over 200 others!) is available from www.pushchairwalks.co.uk . Click here to download this trial walk free of charge. Walk URL: http://www.pushchairwalks.co.uk/swales.html

It's an online calendar for anybody interested in outdoor and healthy activity.

It's a bit of inspiration and information for outdoor play & outdoor learning professionals. Importantly, most of the content comes from people at the front line of outdoor learning (you can find out how to contribute to the calendar here). It can be used as a tool to plan outdoor activities around events and national / international celebrations. You can find the calendar (here).